The 2022 Crush It In Real Estate Kickoff was a HUGE Success!

Recap of Crush It In Real Estate's 2022 Kickoff Event

In Worcester, Massachusetts, on February 10th, nearly 600 REALTORS® from major brokerages across the United States gathered in person, while almost 300 tuned in virtually to learn from some of the top people in the industry. Brian Miranda, RE Broker|COO of Miranda Real Estate Group emceed the afternoon of training sessions.

The Importance of Working ON Your Business

Anthony Lamacchia shared his take on what holds people back from scaling their businesses. The highly-energetic keynote speaker shared his market predictions and tailored his talking points to the needs of the current market, which provided real-life actionable takeaways for the audience. A top theme of the day was letting go of time-wasting activities.

“Time is the one thing none of us can create more of, you have to use your time wisely.”

Anthony added that growing your business involves making changes and giving up mundane tasks. He kept the crowd engaged with his enthusiasm while offering additional guidance on critical topics such as satisfying the concerns of sell/buy clients and skepticism in your business and personal life.

Shant Banosian
The Cost of Waiting 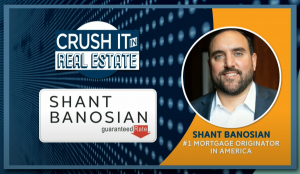 As the number 1 Loan Originator in the country for the past 5 years, Shant Banosian of Guaranteed Rate is a wealth of knowledge for the real estate industry.

He gave REALTORS® strategies to share with clients to ensure they achieve their goals in 2022. As a leading expert in the mortgage world, he talked about how demand remains crazy as ever, and home price appreciation is still rising.

The Platinum Sponsor for the event gave a detailed market update for the year and the changes in clients’ buying power. The crowd walked away armed with talking points for all of their frustrated buyers.

A panel of team leaders spoke on achieving their success with brand awareness and excellent customer service. Jackie Louh led and engaged panelists:

Key insights included culture and passion being the structural basis as they continue to build their teams. In addition, the panelists shared the essential attributes they look for when bringing an agent onto their team.

Over the last ten years, Franco has scaled her business through new construction development. She’s helped her team build their own book of business and understand how to nurture clients. Fleet has focused on giving her clients superior care and attention and teaching her team how to provide a concierge level of service. Black spoke about leadership and having a coach to help you grow your business.

“From a retention standpoint, [it is about] the culture you build.”

Dave Karoly
Getting The Listing on The First Appointment

Dave Karoly provided tips to common rebuttals agents hear during listing appointments. A master with over 1,000 listings under his belt, Dave has been a top trainer for 11 years. He broke down what it takes to convince sellers to hire you when objections arise in a listing appointment.

Converting sellers is more than just getting clients to meet with you, it’s getting them comfortable and doing what is best for them.

Many agents do the right thing on a listing appointment, just in the wrong order.”

The featured Top Agent Interview was none other than Rachael Barach, of The Rachael Barach Group, was an audience favorite. Conducted by Willie Miranda, Broker|Owner of Miranda Real Estate Group, the conversation touched on the 3 biggest reasons Barach’s business was able to explode.

Backed by the remarkable fact she sold over 120 homes this past year; all ears listened as she mentioned her focus areas: hiring a consultant, getting a mentor, and constantly improving herself.

Show me your calendar, I'll show you your bank account."

She went on to add that phrase resonated most with her, and ever since, managing her calendar has become of the utmost importance.

Cormier has been in the business for 1 year and has had over 50 transactions. He spoke about keeping in touch with potential clients and training being the keys to catapulting his business.

Joseph, President-Elect of the REALTOR® Association of Central Mass, has sustained being a top producer for almost two decades by following 3 principles: mastering the craft, mentorship, and making a difference.

Castellano has done over $55 million in total sales in the first 4 years of his business. He mentioned marketing as being most important to his growth and being able to close nearly 100 deals since starting his career.

Strategies for social media, keeping themselves Top of Mind with their sphere, and the diverse ways they each target clients to propel their businesses were also topics of discussion.

Check out more pics from the event here!

What is Crush It In Real Estate?

Crush It In Real Estate launched in 2017 on Facebook to give local and national REALTORS® a sneak peek as to what REAL training is. The Crush it in Real Estate page is continuously fed with videos highlighting tips, tricks, and strategies by industry leader Anthony Lamacchia and other topic experts. As a result, agents, Team Leaders, and Broker/Owners learn new skills, increase sales, and take their business to the next level with REAL training.

Couldn’t make the event this year? Follow our Facebook, Instagram, and YouTube pages for other vital insights from Crush It In Real Estate. To get more info about our next event go to crushitinre.com/training-tour

We will be holding our Fort Lauderdale Crush It event this October 2022. Stay tuned, more details to come!